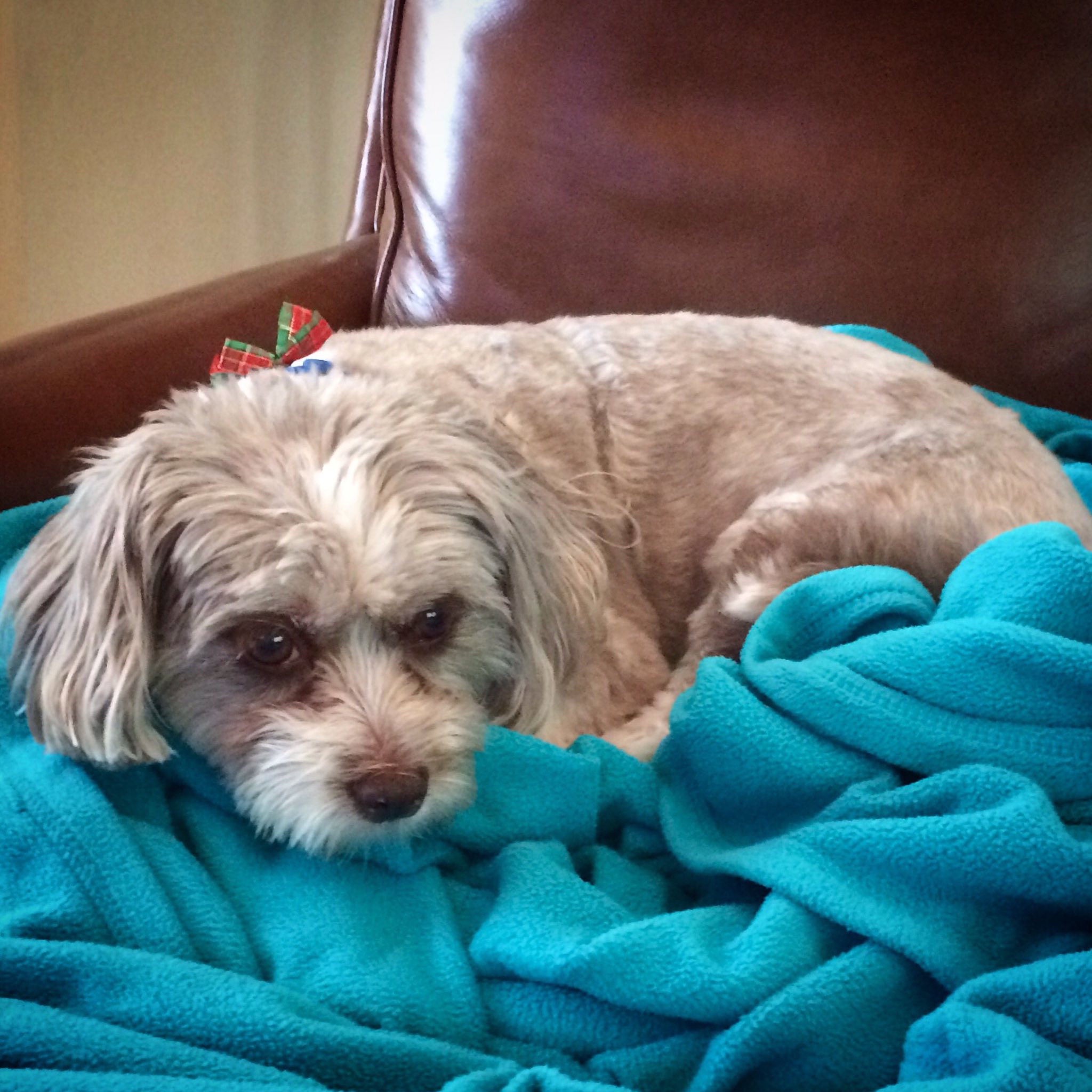 Maggie HATED going to the groomer, but oh did she love the result! She would come home, bows in her hair, and prance around fishing for compliments. We always let her keep the bows until they became untenable, because they inflated her canine ego so.

This morning I got on FaceTime in to say goodbye to my wonderful dog, Maggie, who lived at home with my family in Florida. When I saw her over Christmas she was as happy, as Maggie, as ever, but a fast-moving cancer made itself known shortly after I left. To be honest, she was with us several weeks longer than expected. I am devastated by her loss, but grateful for the decade-ish we had together, and the technology that allowed us to spare her further pain.

Maggie had many names, as all good dogs should. She was, among other things:

Even her tail had a name. It looked like a ponytail, and seemed to have a mind of its own, so we was affectionately called it The Pony. When Maggie was Pony-up, all was well in the world. Pony-down: not so much. Suffice it to say, today, I’m the one that’s Pony-down.

I’m writing this post because I wrote about Maggie way back when I first started this blog, in a post called “The Human Thundershirt”: you can read it here. It’s one of my favorites. She and all of the other puppers I mentioned in that post are now gone. In fact, my family has lost four dogs in four years. Maggie was the last of her generation, which makes her loss hurt all the more. A wonderful chapter has ended, and I miss all of my furry friends terribly.

Luckily, another chapter has begun. There are three new rescue dogs in our home, all acquired in the past two years (one of them just joined us last week!). They are cute and quirky and lovable—an exciting new chapter to be sure. Two of the three are still puppies, so the house will be as loud as ever when I go home for my next visit.

Today, though, I’m not thinking about the new chapter. I’m reflecting on Maggie, and all the ways she brightened my life over the past ten years. Thanks, Mah Goo, for letting me be your Human Thundershirt. It was an honor, a privilege, and above all else, it was a real pleasure.

This picture is from my first summer home from graduate school. I had been away for eight months, still the longest time I have ever gone without seeing my family. It was awful. When I finally returned home (apparently quite tan) Maggie was so excited to see me that she tired herself out, and promptly melted. This remains my all-time favorite picture of her.

“The Six Million Dollar Scholar” is the personal blog of Andrea Milne, a Ph.D. candidate in modern U.S. History at the University of California, Irvine. To get the story behind the blog’s name, click here.